Americans Drive over 3 Trillion Miles in 2014 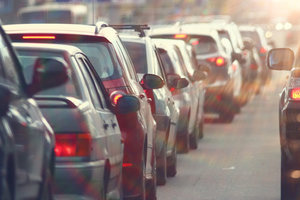 The average US citizen has a busy life. Between Work, school, family, friends and other responsibilities it’s hard to even catch your breath. We are constantly on the move and while many metropolitan areas offer public transportation in the form of bus, train and subway there is no denying that Americans are still very dependent on their automobile to get around.
The federal government announced that last year in 2014 US drivers traveled 3.02 trillion miles. If that sounds high to you, you would be correct. That 3.02 trillion is an increase of 1.7 percent from 2013 and the second highest since 1939, the first year the federal government started keeping track. The only year US drivers covered more ground was in 2007 when Americans covered 3.03 trillion miles! When you add that in with the miles public transit riders cover in a single year, you end up with a ton of zeros and one big headache.
So why was 2014 such a big year for automobiles? People naturally want to point the finger at gasoline’s dip in price and on the surface that would make sense. When it’s less expensive to fill up your tank, families are left with extra income which makes traveling and leisure activity more accessible. The problem is per vehicle mileage continued its year-on-year decline in 2014. It appears that even though gas prices were lower, people still weren’t traveling as much, at least not by car.
The uptick in miles traveled in the end comes down to sheer volume. As of 2012, the most recent year information is available, there were 255.9 million vehicles on the road. So even though people are driving less there are more drivers than ever on the road. This influx of available drivers has caused many issues including additional wear-and-tear on our nation’s already fragile infrastructure and a rise in traffic jams. Transportation Secretary Anthony Foxx said US drivers are stuck in traffic for the equivalent of nearly five days a year.
Other interesting tidbits show the average US driver is getting older with 93.5 million drivers on the road age 50 or over, up 22 percent from 2013. In a decade it is projected that 20 percent of all drivers will be over 65 years old! Not only is our infrastructure aging but our drivers as well.
Why should I
sell my car to
webuyanycar.com®?