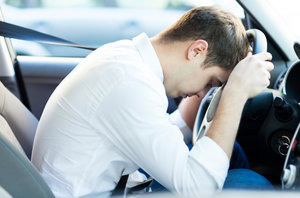 Heart attacks are scary, not only because they are potentially fatal but also because they can happen at any time, seemingly out of nowhere. Heart Attacks that occur while the person is driving a vehicle are even more terrifying. Not only is the person in question undergoing a serious medical emergency but he or she is also putting the lives of others in jeopardy.
As baby boomers continue to grow older the amount of auto accidents caused by heart attacks will rise as this generation ages. While auto makers are focusing on increased safety in the event of a crash, Ford is actually taking it one step further by implementing technology that will trigger a safe emergency stop when a driver starts to have a heart attack.
The technology would be housed inside the driver’s seat and use sensitive electrodes to monitor the driver’s heart rate and vital signs for irregularities. At the same time additional sensors would be placed in the steering wheel as well as a camera included in the vehicle to track a driver’s head movements. If a heart attack is detected a computer guided system would take over and bring the car to safe stop. The next step and would be for the vehicle to alert the authorities either through the driver’s connected cell phone or possibly through a built-in service such as OnStar.
Dr. Achim Lindner, a medical officer at the Ford Research Centre, said: "This not only benefits the driver; but also could make the roads safer for all users.” Pim van der Jagt, managing director of the Ford Research Centre in Aachen, Germany, said 100-year-olds driving cars "will not be abnormal". This meant the number of drivers at risk of heart attacks would "rise considerably".
Beyond heart attack detection this same set up could be used when a driver is starting to fall asleep behind the wheel. In this scenario an automated safe stop may not be necessary but the sensors could trigger an audio cue to the driver to wake up and pull to the side of the road to rest. Ford has been working on this for a few years and has prototype technology from 2011 ready for more extensive testing but the company is reluctant to say when this next step may happen.
Mr van der Jagt did say that once the decision was made to implement this into Ford’s production cars, it would take less than five years to ensure all new cars had this technology installed.
Why should I
sell my car to
webuyanycar.com®?