Copyright Law and the Home Mechanic 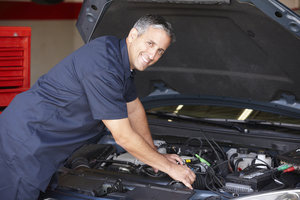 Have you heard of the Digital Millennium Copyright Act? If you’re a car enthusiast who enjoys tinkering with your car, than you better familiarize yourself real quick. Better yet, hire a copyright lawyer because you might just need one.
Working on your car is a hobby that dates as far back as automobiles themselves. Picture sunny suburbia and you’ll almost instinctively envision children playing, sprinklers watering lawns and people working on their cars. It’s ingrained in American culture just like apple pie and baseball. Those who have been at it for decades can attest that even though the hobby is the same, the cars they work with have changed drastically. Today’s vehicles are more like computers with wheels attached than anything else.
With new and increasing technology, vehicle functions are starting to rely more and more on computers. Today, engine performance, steering and even braking all depend on electronic control units. These electronic control units or ECUs can be modified by hobbyists to increase engine performance, gas mileage and make any number of changes to their car. The problem is these ECUs are run by computer code that automakers consider proprietary. So while it may seem strange, tinkering on your car is now the same as jail breaking your cell phone.
Currently there has been no known case where an automaker has pursued litigation against an individual for making modifications to an ECU but that doesn’t mean the day isn’t coming. While only hobbyists and mechanics have been able to modify and improve a car’s performance, automakers could soon step up and offer the same enhancements as a paid service to the general public. Automakers see this frontier as a great way to not only tailor vehicles on an individual level based on the driver’s needs but also as a lucrative avenue to upcharge consumers for each modification they request.
Does a driver want a male voice for their entertainment center instead of a female one? Automakers could make that change in your car. Does an automobile owner want an extra 40 horsepower? Automakers could sell that upgrade in the form of a memory stick that gets plugged into the car. If automakers push for a collectible upgrade service reminiscent of an app store, it would benefit them to clamp down on mechanics and hobbyists who can do the same thing for free or for a discounted rate.
This is where that copyright lawyer comes into play. Now someone who simply works on their car as a hobby could be undercutting automakers’ revenue. Instead of paying the automaker for the upgrade, they are doing it themselves, similar to downloading an album or movie without paying for it.
The good news for gearheads is that there are organizations fighting for the continued right to tinker. The Electronic Frontier Foundation is asking the US Copyright Office to exempt hobbyists and home mechanics from the law. In the petition, the EFF asks the office to eliminate the legal risks posed to vehicle owners who are "engaged in a decades-old tradition of mechanical curiosity and self-reliance."
For anyone interested in cars this is certainly something to keep an eye on. While there hasn’t been any lawsuits or litigation against a vehicle owner yet, that could change sooner than you think. Will an American hobby die at the hands of technology? Only time will tell.
Why should I
sell my car to
webuyanycar.com®?