Drivers know texting hazards but do it anyway 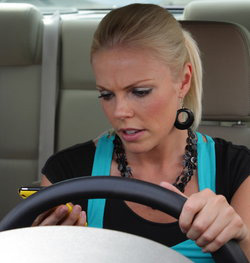 The reasons are numerous and some, even ridiculous. “I need to stay connected,” “I am worried about missing out on something,” “I am addicted to texting,” and “my driving performance is not affected by texting.” These are the reasons people admitted to texting while driving in the latest survey done by AT&T. A survey that shows motorists understand the hazards of texting while driving, but do it anyway.
The study which surveyed frequent drivers who text daily displayed a startling three-quarters who said they were aware of the dangers but still participated in the activity anyway. While two-thirds responded saying they wait till a red light or stop sign to read text messages, over a quarter still send texts while driving. This has come after extensive advertising campaigns trying to eliminate texting while driving. Even in areas where texting and driving is illegal, motorists still said they participate in the activity.
David Greenfield, founder of the center for internet and technology addiction and professor at the University of Connecticut’s school of medicine said, “The survey is the latest to show a discrepancy between people’s attitudes and behaviors.” Greenfield theorizes that at least a portion of this discrepancy is due to addiction similar to gambling. His research shows that getting nice messages or even anticipating nice messages increases dopamine levels in people.
David Greenfield’s research has led him to call smartphones “the world’s smallest slot machines” because the increased dopamine levels is similar to that found in gamblers and drug addicts. So when laws and advertising campaigns can only go so far to stop texting while driving, the question becomes what to do next. What angle or approach will stop texting and driving completely? Some have pointed to smartphone manufacturers creating blocks on cell phones while in a moving vehicle but that only brings up questions of freedom. How is the cell phone to know whether you are driving or merely a passenger in the car?
The next step is still undetermined but what we do know is general awareness can help decrease the amount of people texting while driving, but like anti-drinking and driving ads, general awareness only goes so far.
Why should I
sell my car to
webuyanycar.com®?