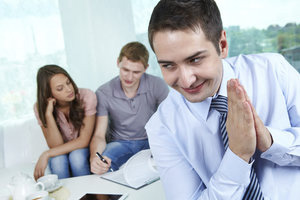 “… buyers with a trade-in pay an average of $990 more than those who do not trade in their used cars.”*
Let that sink in for just a moment. When first read it’s hard to comprehend how that could be true, but it is and it happens every day, all across America. It’s called price discrimination and it doesn't feel too good.
The idea of a trade-in at a dealership is to lower the total amount paid for a new vehicle. Sure there is a compromise made, weighing cost vs. convenience. Certainly a dealer trade-in won’t fetch as much money as a private sale but a private sale takes time, upfront cost and inviting strangers to your home to look at the car. That’s why vehicle owners see Trade-ins as a viable option.
Now researchers in California for the Journal of Industrial Economics have proven that not only are customers getting a lower price for trade-ins but the dealership is recouping even more money by charging more for the new vehicle. Anthony Dukes, Assistant Marketing Professor at the University of Southern California (USC) and one of the researchers on this project spoke to Consumer Affairs saying, "The most important finding of our research is that your decision to trade in your old car tells the dealer something about you and your insensitivity to price"**
Using a statistical model and a sample of premium midsize sedan transactions between 2001 and 2005 the group of researchers were able prove that car dealerships can judge a buyer’s willingness to pay not only on his or her decision to trade in an old vehicle but also it’s make, model and condition. Using this information they can hold out for a higher price on the new vehicle, something they wouldn't do during negotiations with a buyer that didn't have a trade-in.
But what about company loyalty? Turns out that folks who purchase the same make as their trade-in vehicle end up paying more. Same make and model? Even more! $990 dollars more on average. The decision to trade-in your Ford for another Ford tells the dealership you were happy with your previous purchase, you aren't a risk to go buy a Chevy and are willing to pay more for the same satisfaction.
For the average household, it may seem like you’re trapped. What should a family do? Try going through tough negotiations with car dealerships and hope you don’t get taken advantage of? Try selling the vehicle privately and endure the upfront cost, time and stress associated with dealing with the public?
The answer is webuyanycar.com!
All we do is buy vehicles; we’re not a car dealership and won’t try and sell you anything. We put money in your pocket and the negotiating power back in your corner. By opting to sell your vehicle before ever stepping foot on the dealership lot, you remove the dealership’s ability to discriminate against you.
Not only that, but we make selling your car easy, much easier than a private sale! In as little as thirty minutes we’ll inspect your car and offer you a fair market value for your vehicle. No hassle, no pressure and no negotiation. We’ll complete all the paperwork for you and even settle any financing. You’ll walk out with a check in hand and the ability to negotiate a lower price for your new vehicle using the power of cash.
Beat the expert dealerships at their own game, sell your car to webuyanycar.com. We are the fast, safe and fair way to sell your car, truck or SUV.
* Kwon, Ohjin and Dukes, Anthony J. and Siddarth, Sivaramakrishnan and Silva-Risso, Jorge M., The Informational Role of Product Trade-Ins for Pricing Durable Goods (October 1, 2014). Journal of Industrial Economics, Forthcoming. Available at SSRN: http://ssrn.com/abstract=2569138
**http://www.consumeraffairs.com/news/why-you-shouldnt-trade-in-your-used-car-050515.html
Why should I
sell my car to
webuyanycar.com®?