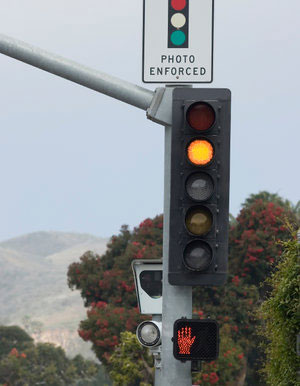 How could two pieces of technology that are so similar be heading in such different directions?  That’s a good question, one both government officials and members of the Insurance Institute for Highway Safety are trying to figure out. So far, no one can make any decisive conclusions. The dreaded red-light camera and the even more dreaded speed-trap camera basically do the same thing. Both are automated technology used to control and report traffic law violators.
Years ago, in their infancy, one could have easily assumed that both their futures would be tied together. They would either both succeed or both fail. After all, it’s the automated aspect that makes drivers’ skin crawl, correct?
Maybe not...
According to records kept by the Insurance Institute for Highway Safety red-light cameras are declining while speed cameras continue to prosper. The reasons behind the divergent paths are unclear. Automated traffic cameras thrive and die for different reasons, allowing for too many variable factors to really point a finger at one single catalyst.
New Jersey Governor Chris Christie used to see red-light cameras as a major benefit. They kept the roads safer and allowed a steady source of income from violators. However, as recently as last month his tune has changed. Governor Chris Christie told The Asbury Park Press, "I'll wait until all the evidence comes in ... but I will tell you that my gut feel on this one is that I don't favor it"
The number of red-light cameras hit a high at 540 programs in 2012 but have since declined 7 percent to 502 programs. Conversely speed cameras have grown from 115 to 140 over the past three years, a 21.7 percent increase.
One study that experts point to was performed in 2005 by the Federal Highway Administration and it studied the effectiveness of red-light cameras in relation to driver safety. The results were varied. The red-light cameras helped decrease one type of collision while increasing the probability of another. Not exactly a check in the win column for red-light cameras.
Additionally, there have been technology problems associated with the red-light camera. Chicago’s red-light camera program actually ticketed thousands of undeserved motorists! So do speed cameras have these same types of issues? The answer is unclear but the general consensus is negative. Speed cameras may have some but there is still enough evidence to continue testing them and the growth of that program proves that. Only time will tell what the future has in store for both sets of cameras but is interesting to see how technology that is so similar and both designed to make the roads safer have gone in completely opposite directions.
Why should I
sell my car to
webuyanycar.com®?